A downloadable game for Windows, macOS, and Linux

A game for up to 4 players in the style of a classic 80's arcade game; a mixup between Asteroids and Space War with cooperative and competetive play modes: "Mission mode", "Versus Battle" and "Team Battle".

Under Linux in versus battle mode it got stuck 2 times by not recognizing the death of both and playing music and showing the movement of the asteroids without respawning the ships (had to kill the game process on text terminal).

The screen seems rather crowded, i.e. at the beginning one would prefer an easy level to get acquainted with the controls - without fast reactions one is killed in seconds.

Is a coop mode planned - so 2 players can work towards the same goal (saving people, destroying asteroids, killing enemies ...)?

But with some polishing this could be a fascinating game.

Many thanks for your work - incl. Rush Troopers which is shining.

Thanks for your praise and comments. I will look into it fixing the things you mentioned.

Could you perhaps elaborate on the game getting stuck 2 times... Do you perhaps remember if that was due to asteroid hits or due to the bullets?

As for a coop mode, that already exists as you can play "arcade mode" with with up to 4 players.

Thanks for liking the game,

I think we were just both killed by asteroids the first time (just starting to learn the controls) - but instead of respawning the asteroid movements and music went on - but without any message or action - similar to a screensaver - so I killed the process from text terminal. Maybe I missed something ...

I think we than tried team mode but were not able to be both in one party - we will look into it when we meet again to play and look for "arcade mode".

Personally I am a fan of casual games - small fascinating games which one nearly can play in seconds - especially when local coop mode is supported for 2 and more players. And I really miss those classical pacman, snake, asteroids, ... games using current HW. There were no shortage of such games under DOS ... but today games are mostly made to be played for days or weeks - which is too much for my taste. I others shout that a game is too short (but otherwise good - it typically suits me. ;)

I updated the game and made a quick change to the behaviour of the timer that activated the "victory message" - which should be more strict now. However, I am not completely certain that this fixed the bug, so I should test some more. I've also added an "announcer" voice.

As you can guess I also still like the old arcade-esque type of games that require you to gain some actual skill and hone your reflexes.

Many thanks for fixing the bug in versus mode.   It will no longer get stuck at the conclusion of a game. Instead the "game over"-message is now displayed correctly and it is possible to continue with the main menu.

However we have encountered a minor bug when selecting ships:  While displayed correctly for player 1 shield and speed is always displayed as maximum (5) for players 2, 3 and 4.

Not a bug but a feature request:
Team battle with 2 players does not allow them to join the same team - which is something I would sometimes like to do when playing the game with a friend. For this mode friendly fire should be without effect, so one can concentrate on the mission and the environment.

Thanks for letting me know, I just resolved the problem. ;)

I am not sure what you mean with team battle with 2 players... You can play a coop game with "mission mode" and friendly fire is off by default so you can not hit each other. (Although you can still crash into each other. :P) 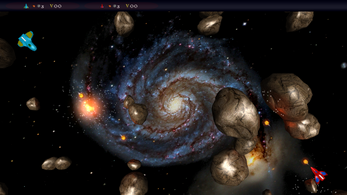 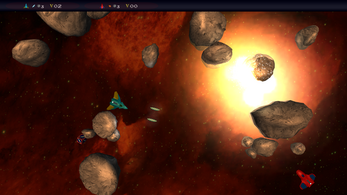 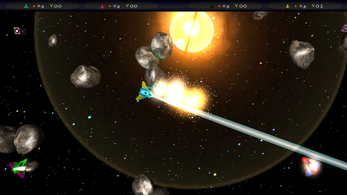 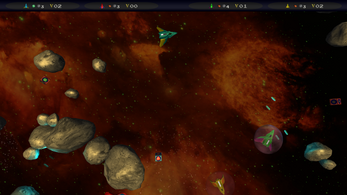 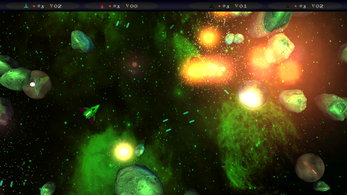